As the name of this type of boat – dugout boat – suggests, they were made from hollowed out tree trunk. In Ireland, the majority were made from oak, with alder and scots pine used to a much lesser extent. Through time and with trial-and-error the boat builders learnt the best techniques in fashioning a tree trunk into a boat. These boats date from about 7000 BC to almost 1800 AD.

Dugout boats had a wide variety of hull sizes and shapes. Archaeologist, Dr. Niall Gregory, who specialises in the study these boats has determined that the size and shape of each of these boats informs us of the environment in which the boat was used – whether, river, like, estuary, etc – and purpose for which the boat was designed; for example, cargo carrying, fishing, harvesting estuary resources, as a ferry boat, warfare or raiding, and so on. The size and shape of the boats were not determined by the period in which they were built.

The boat builders were very exact in the type of tree trunk they chose to use. Their preference was always for a tree trunk with a straight grain in the wood; free of knots or rot – typically forest grown trees would have these criteria. (Read more…) Ideally the tree would have been reasonably close to the location where it was to be used. This criteria would have ensured that the tree trunk did not have any weakness that would make for a poor boat. A tree grown in a more open location tends to have lower branches and a twisted or distorted wood grain. It also grows more unevenly which affects the quality of the timber. 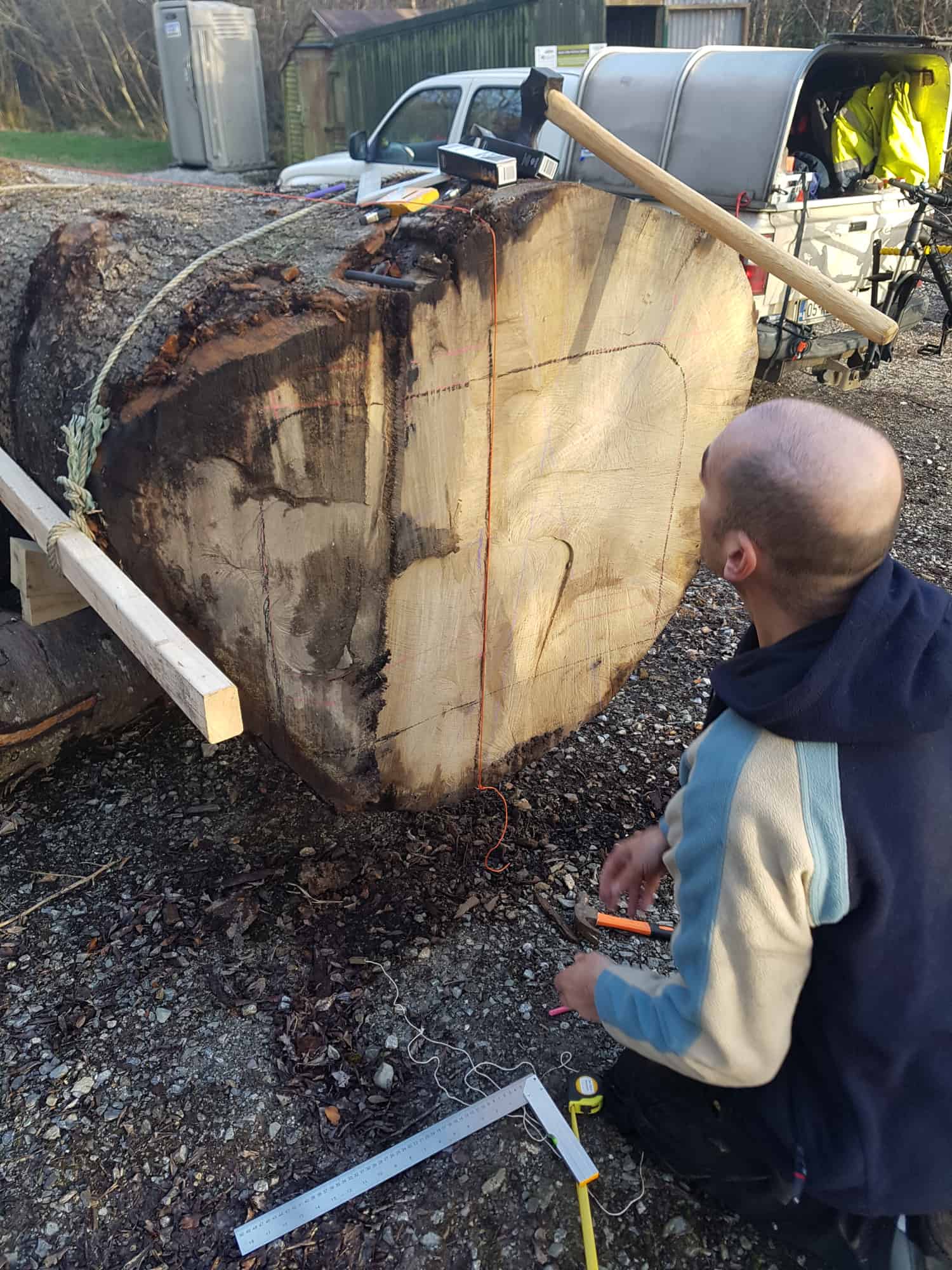 In all probability the tree would have been felled during the winter months. This is because, without a leaf canopy, it is easier to see the full tree trunk and determine its quality; there is a lower sap or moisture content in the tree; there is less likelihood of forest floor growth to obstruct working on the felled tree trunk; and, winter would have been a time of less activity compared to other times of the year, such as crop sowing or harvesting. The lower sap content is important because as the felled trunk dries, it radially splits out from the centre of the trunk which creates weakness or at worst, makes the trunk unusable. During the winter with less sap, its rate of drying put is much reduced and therefore rate of splitting becomes much less.

Preparation of the Tree Trunk

Once a suitable tree was selected and felled, it was cut to the required length. Excess timber such as branches were cut off and may have been used as wedges to prevent the trunk from rolling. Freshly felled (unseasoned or green) wood was used. The higher sap or moisture content slows the rate at which the wood hardens through drying out and also reduces radial splitting. Once the trunk dries out, it becomes very hard and difficult to work with axes and other tools. 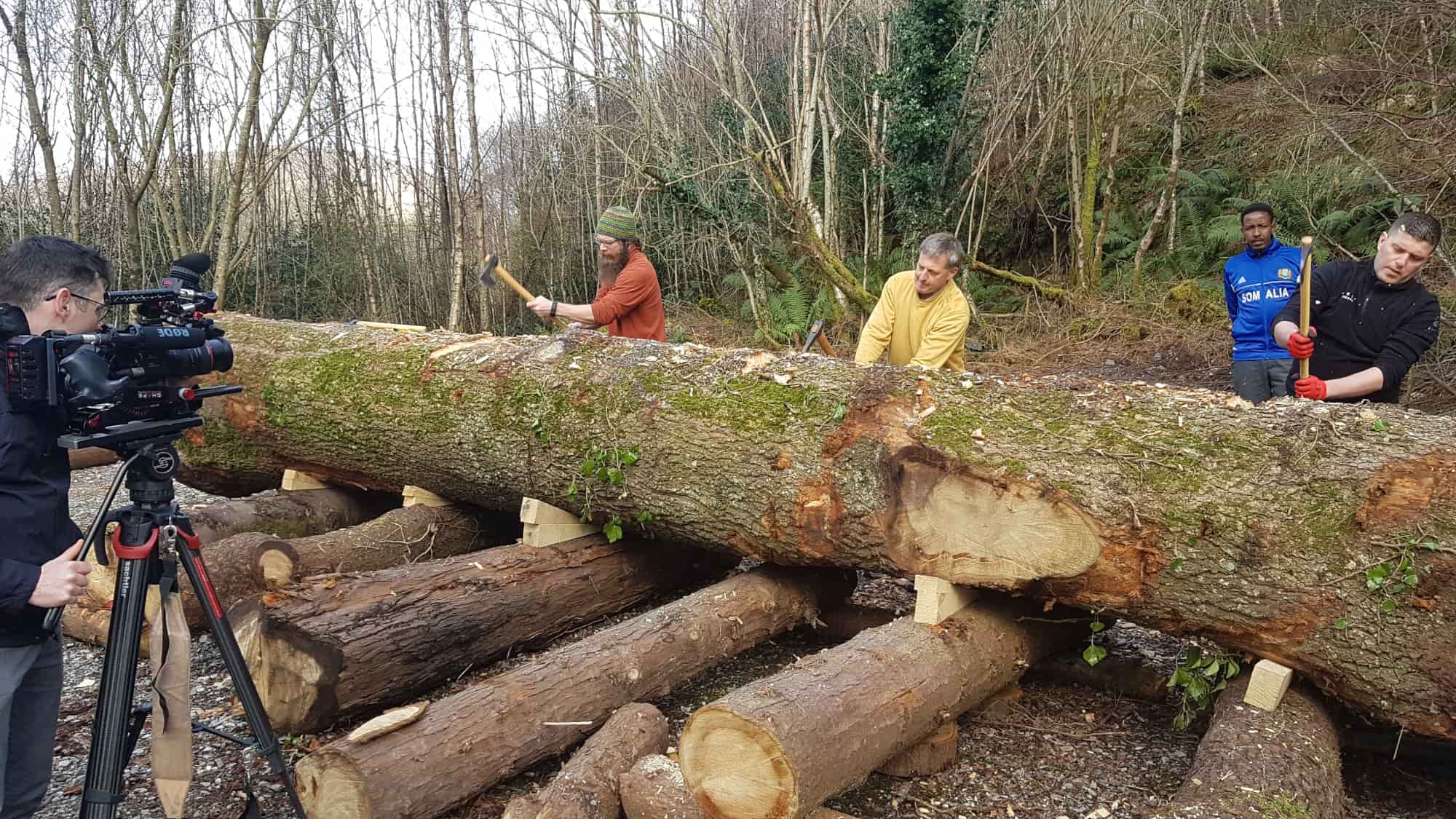 The tools used depended on thee period in which the boat was made. During the Stone Age (Mesolithic – Middle Stone Age; and Neolithic – New Stone Age), stone tools were to only available tool. The Bronze Age and Iron Age invariably made use of bronze or iron tools. Notwithstanding, all eras used axes and adzes (axes with their heads set perpendicular to that of axes). The rest of the tool kit consisted of wood augers (manual drills) and wedges. Even timber wedges were used to split the trunk in a controlled manner. Despite common opinion, these particular boats generally did not use fire to hollow them. The timber would have to be very dry for fire to be effective and quite often in the drying, thee tree trunk would have split with large cracks that no longer made it useable for a boat. 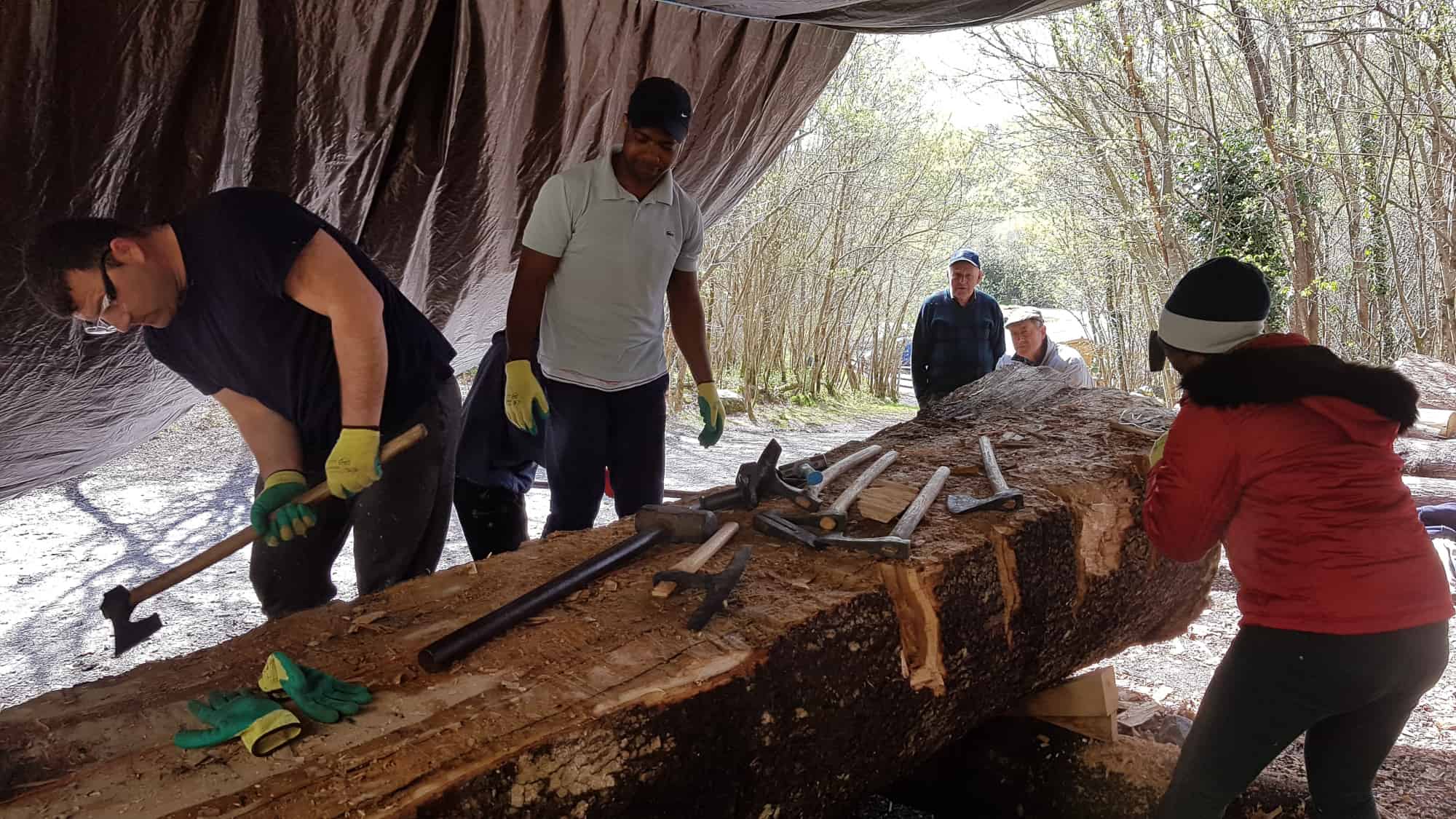 Archaeologists hypothesise from examining the original boats how they may have been made, by identifying the tool marks and consequently matching them to tools found on excavations. Experimental archaeologists then use replicas of these tools and experiment through trial and error to see what methods work best to achieve the required result and thus a more complete knowledge of the boat construction.

The external shape of the boat was made first. Typically this was started by removing the bark and unusable sapwood.  The sapwood is too soft from which to make a boat and would have led to a weak hull that would have split and leaked. 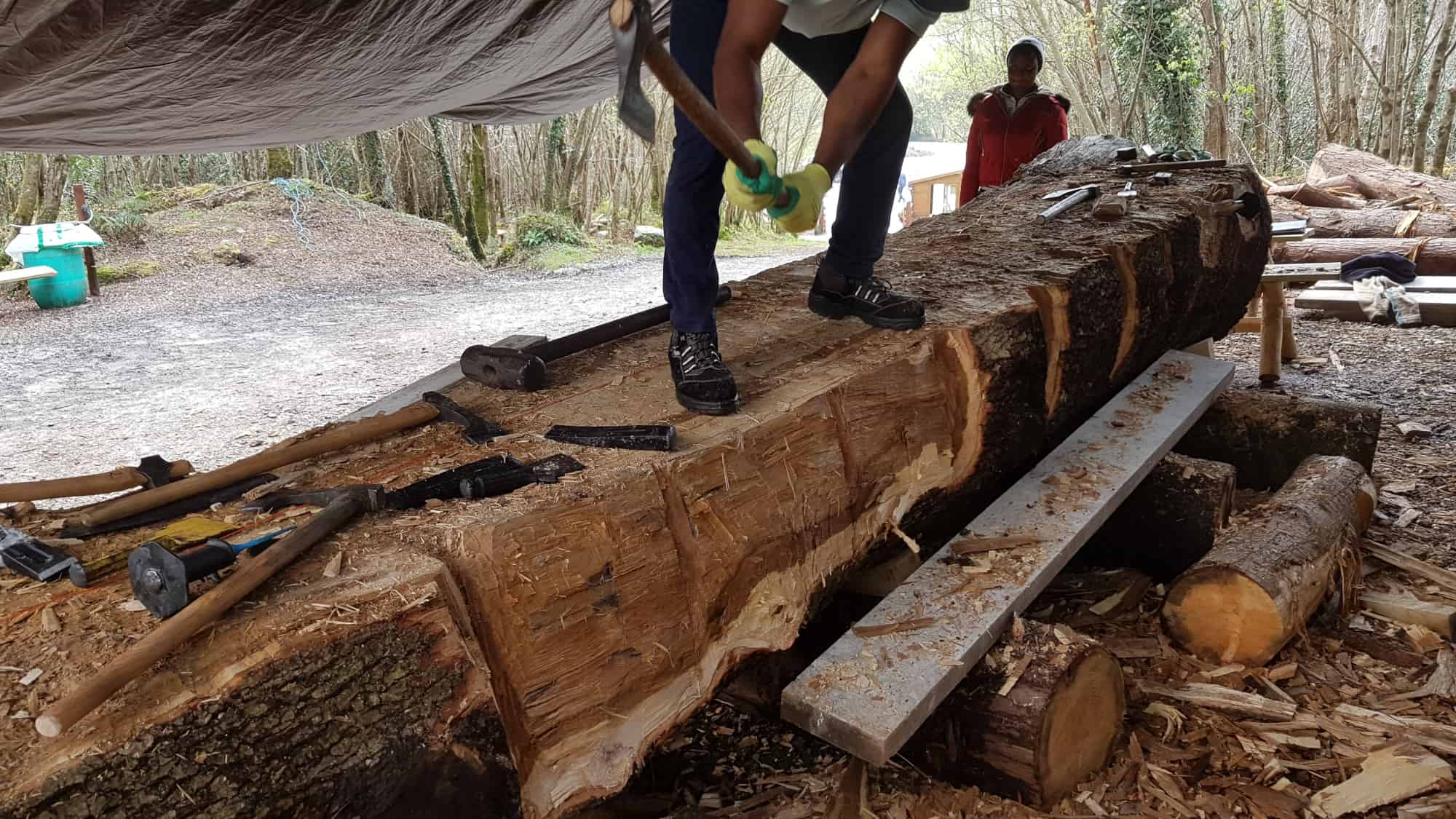 Once this was done, the builders marked out the size and shape of the boat on the trunk. It is very possible that they used templates based upon what worked from previous boat construction. Also cordage and charcoal sticks were used to draw the centreline of the tree trunk / boat. The templates would have been made from timber and followed lines and shapes that reflect the desired hull shape at various points on the hull and of a set size. These would have reflected the intended size of the boat and the design of hull and consequently the intended use of the boat. The templates were in effect a cut-out to reflect the finished profile at a given location on the hull. Cordage and charcoal marks were used to maintain the centreline of the trunk of future hull, perpendicular offsets and locations of the templates. 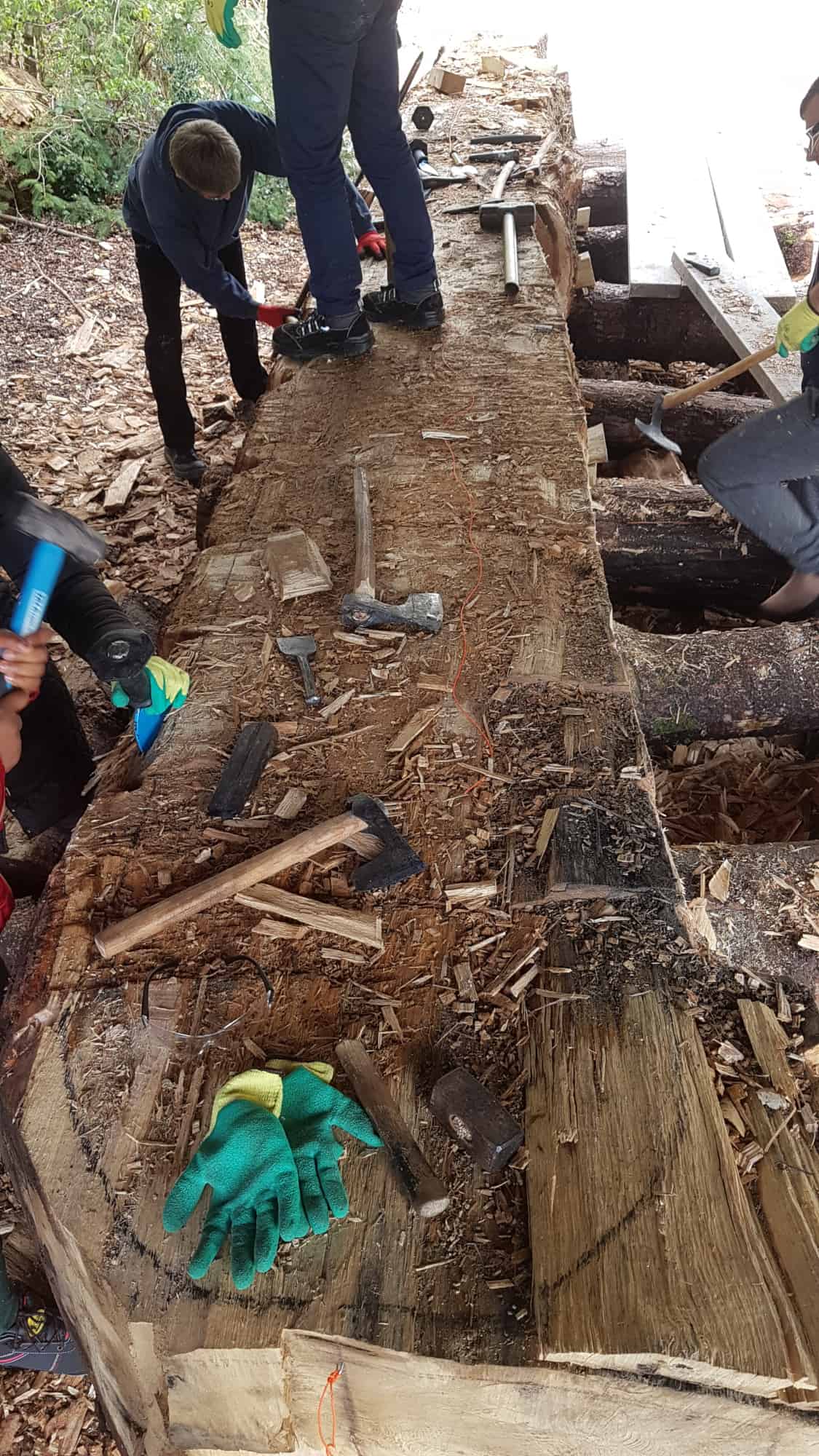 Typically up to three-quarters of the cross-section area of the trunk (less the bark and sapwood) could be used to make the boat. The height sides of the finished boat could therefore be up to three-quarters its width. The excess wood was removed from the trunk by a technique called score and splinter. Axes were used to chop V-shaped grooves into the trunk set across the grain of the wood – Scoring. The remaining excess wood between the grooves was then splintered off using wood or metal wedges – Splintering. This was repeated until the desired depth or amount of wood was removed. 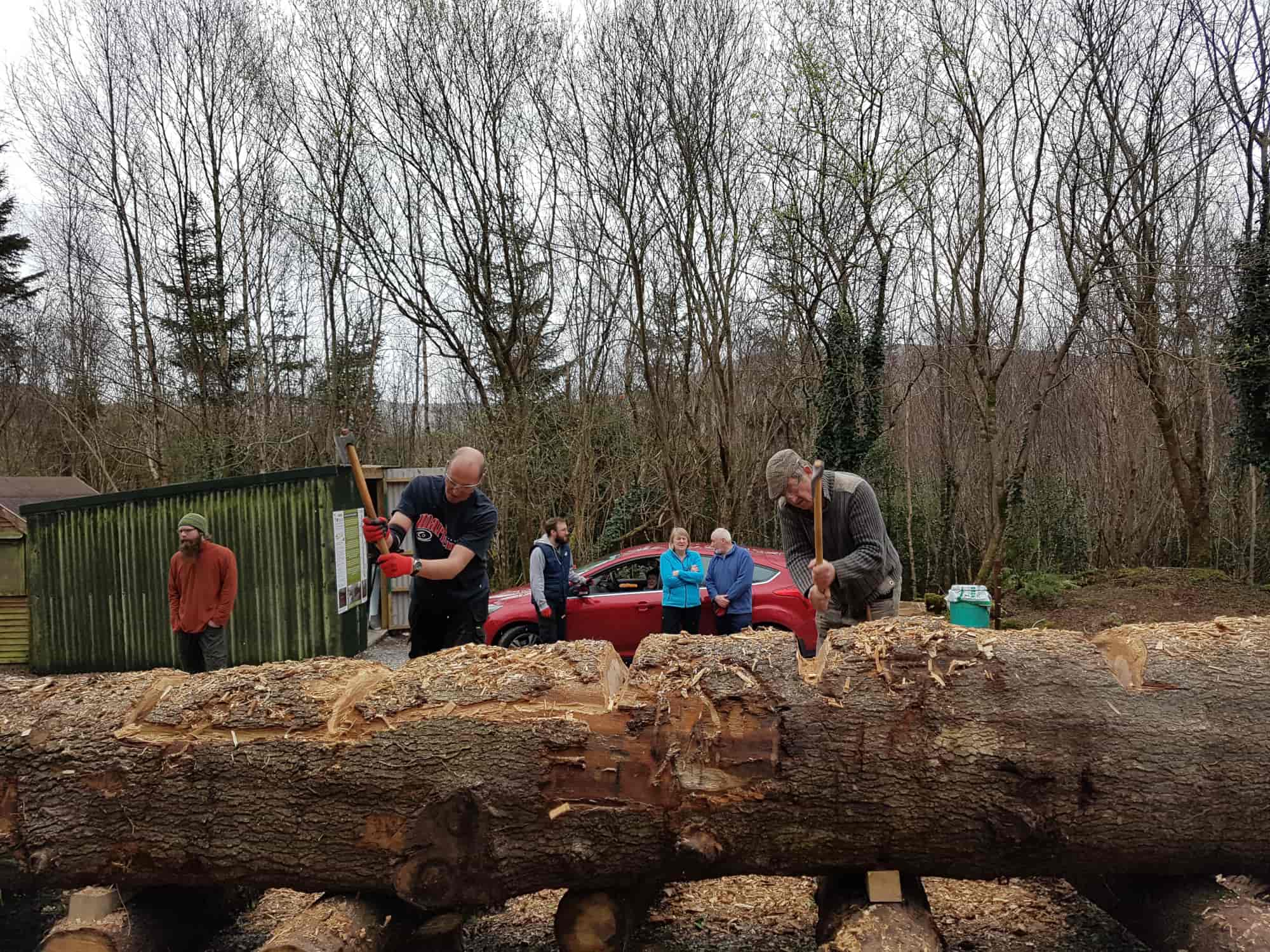 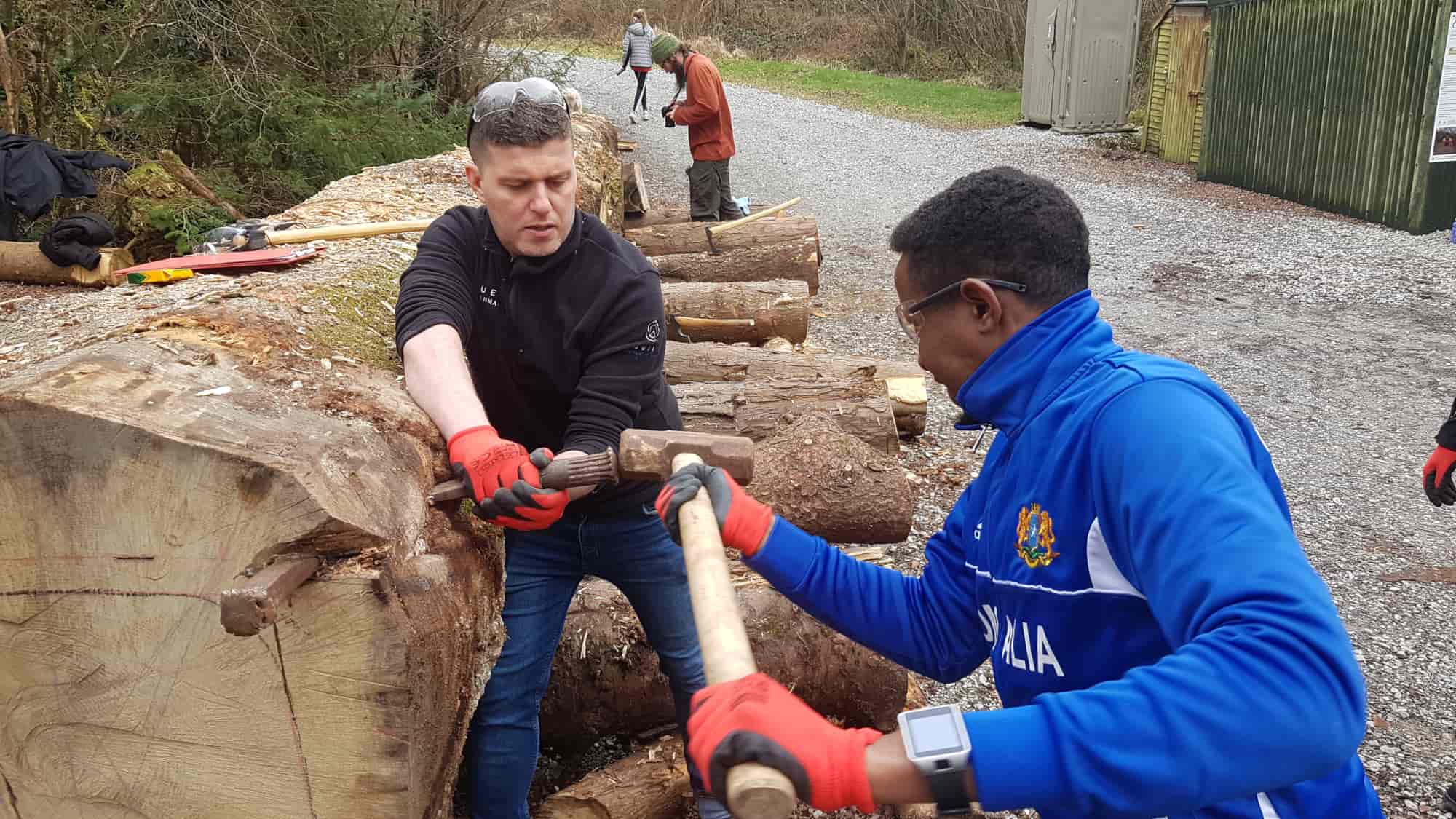 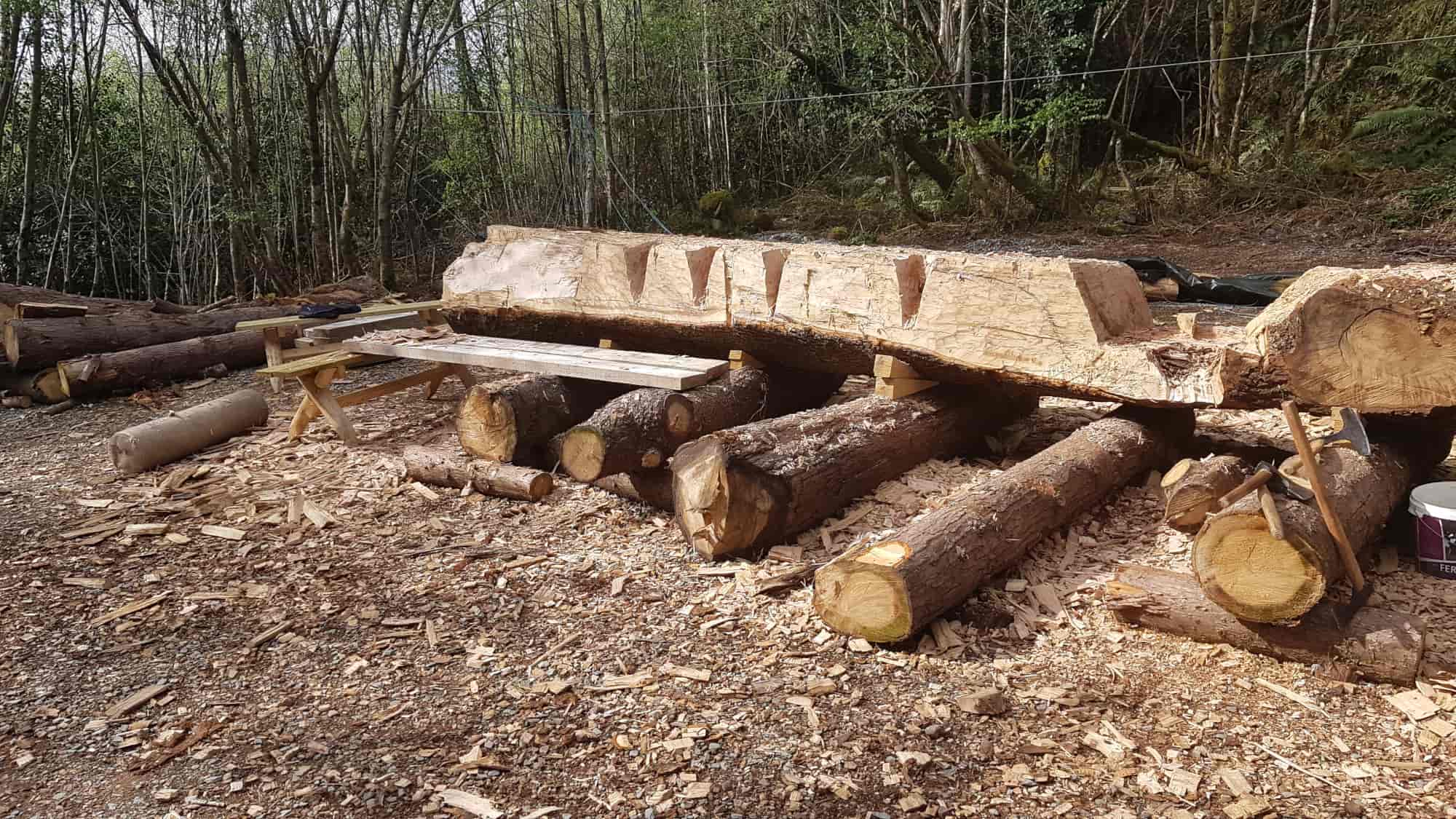 After the bark and sapwood was removed, animal fat was used to smear on the trunk. This helped prevent too much moisture evaporating from the expose timber, which would otherwise cause splits on the trunk. 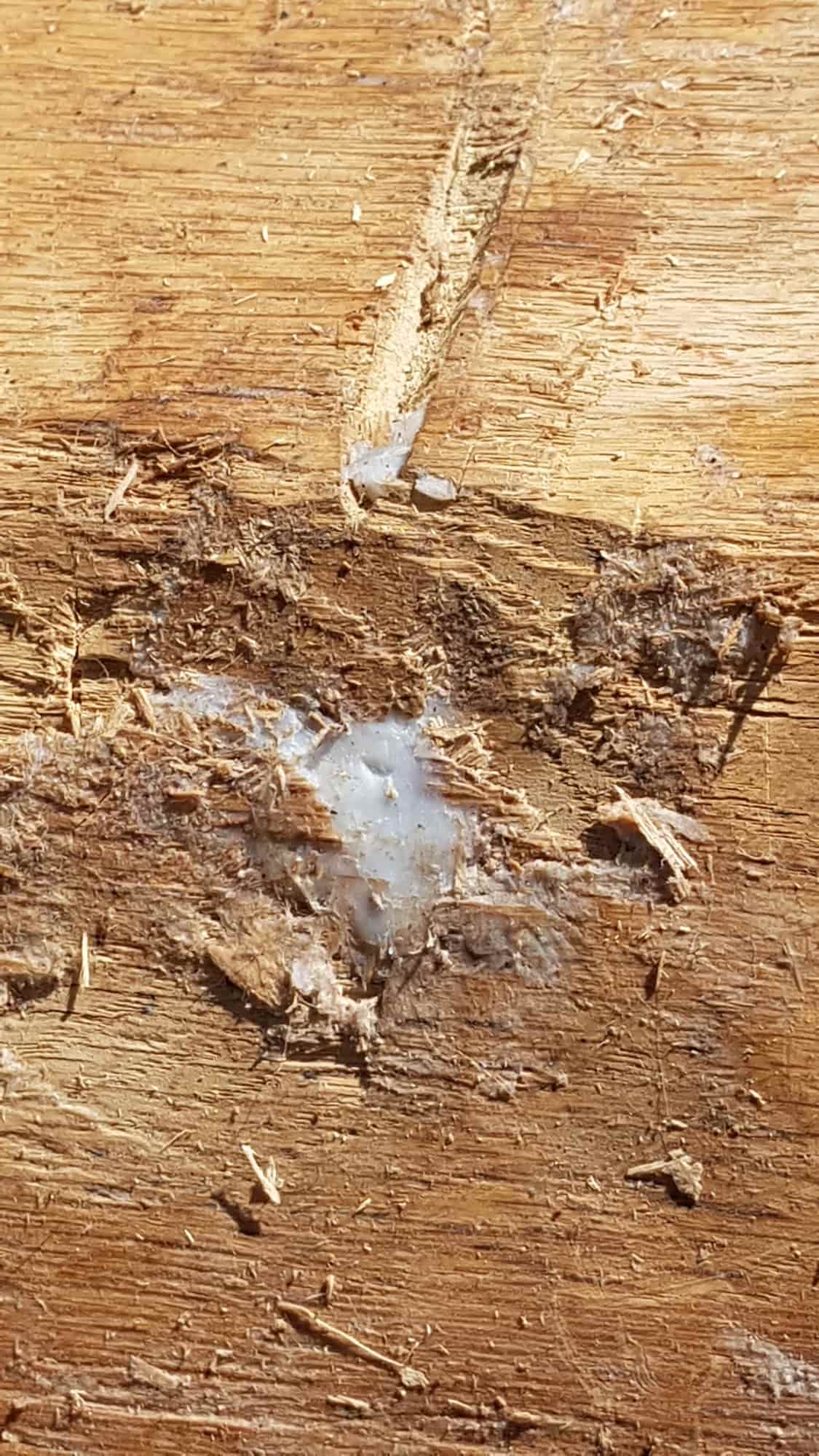 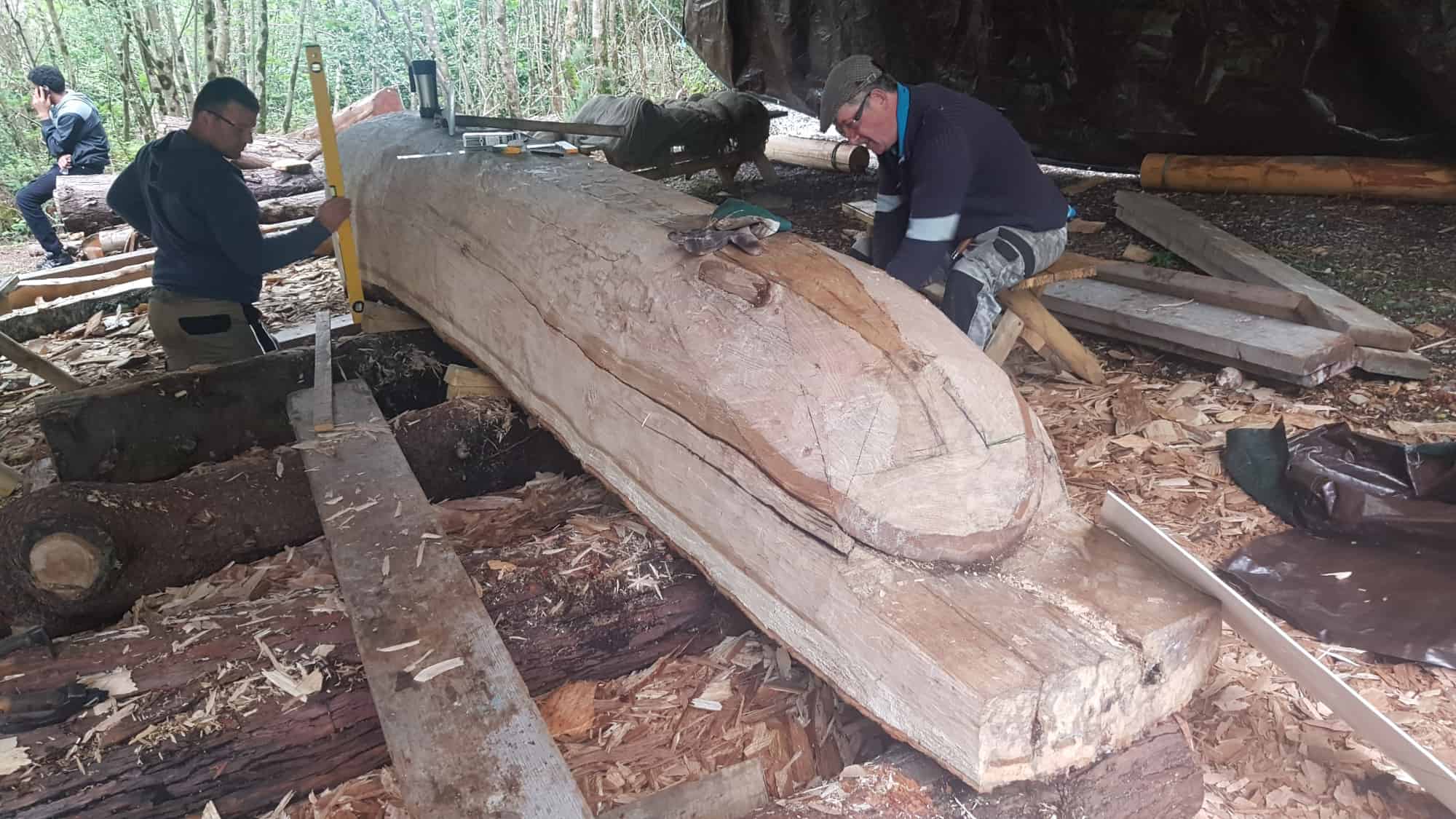 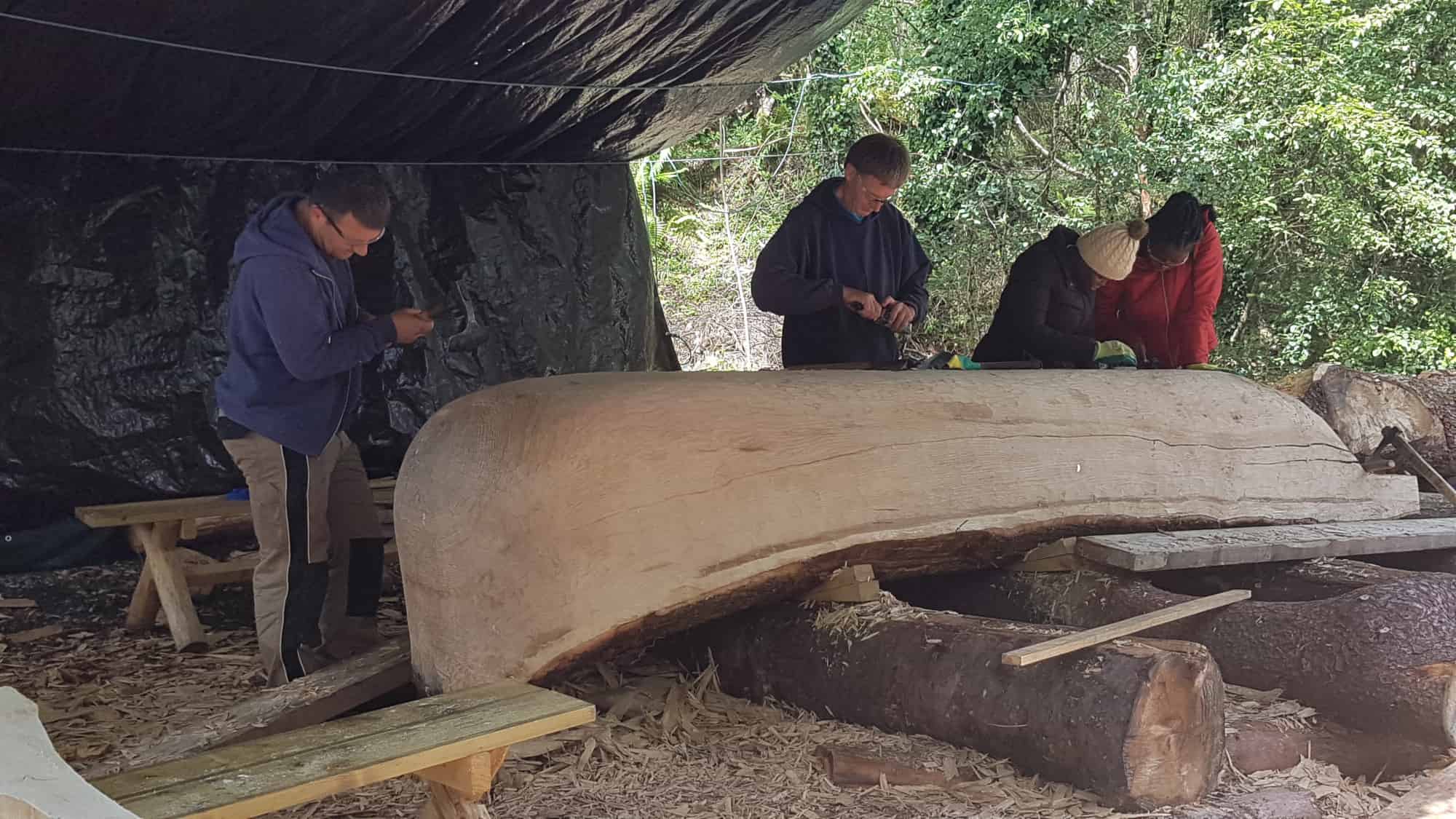 Once the tree trunk was shaped to that of the boat’s external hull, the trunk was rolled over using wooden levers and then set in place with wedges so that the hollowing could start. A number of these boats had thickness gauges set in the boat before it was rolled over. Thickness gauges are holes drilled through the floor of the boat from the outside (when it is still upside down). These were drilled deeper than the required floor thickness, so that when they were later encountered during the hollowing of the trunk, the builders could then gauge the hollowing out and stop when it came to the suitable thickness.

In hollowing the boat, the sides would have been marked out using charcoal stick and the hollowing was started within the marked out area. Typically in the sides were left deliberately thick at this stage to allow for any accidents, such as a wayward axe swing or the fibre of the wood pulling too much wood from the side of the boat. The interior of the boat was hollowed out by axes used to chop V-shaped grooves into the trunk set across the grain of the wood – Scoring. The remaining excess wood between the grooves was then splintered off using axes along the grain of the wood and up to the edge of the marked out area – Splintering. This was repeated until the desired depth or amount of wood was removed. Frequently adzes were used to complete the hollowing and hammer and chisels where desired for the final finish. 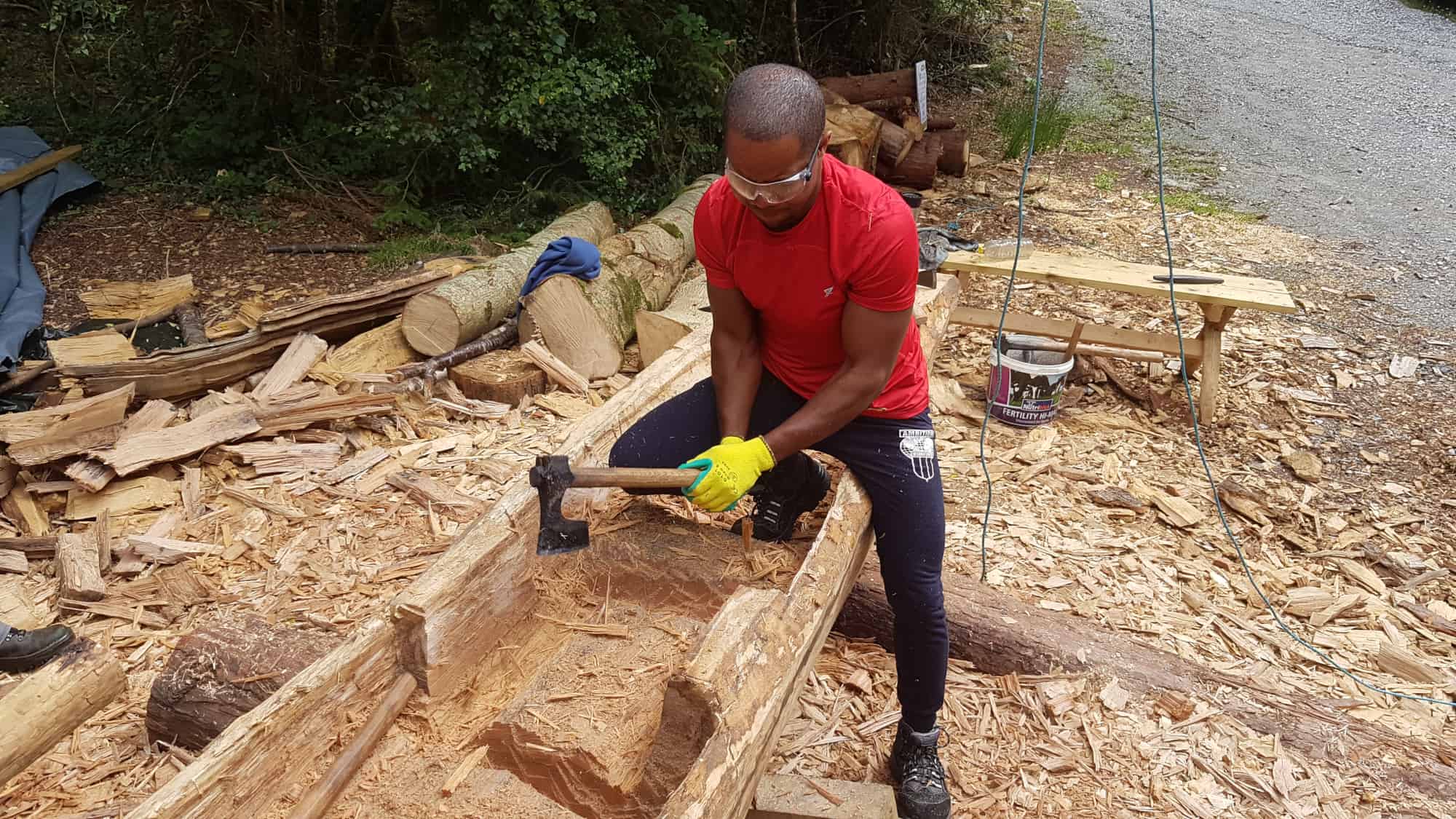 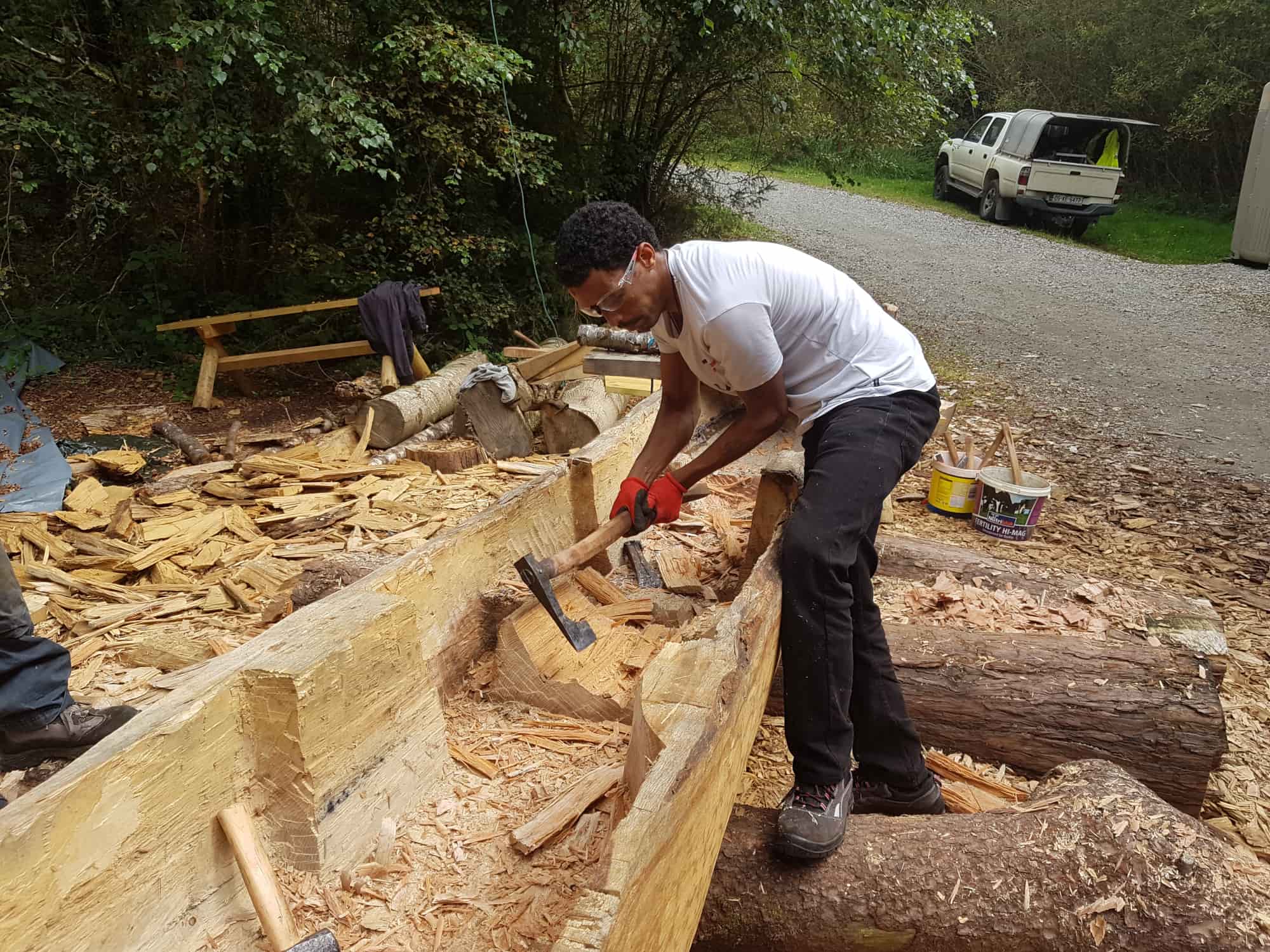 During the hollowing out, the boat’s interior was filled with water. This helped keep the timber wet and soft to work, otherwise it would dry out and become too hard to work or even split apart and become unusable. There is also evidence that these boats were left submerged while they were waiting to be finished. This helps preserve them and keep the timber soft enough to resume hollowing. 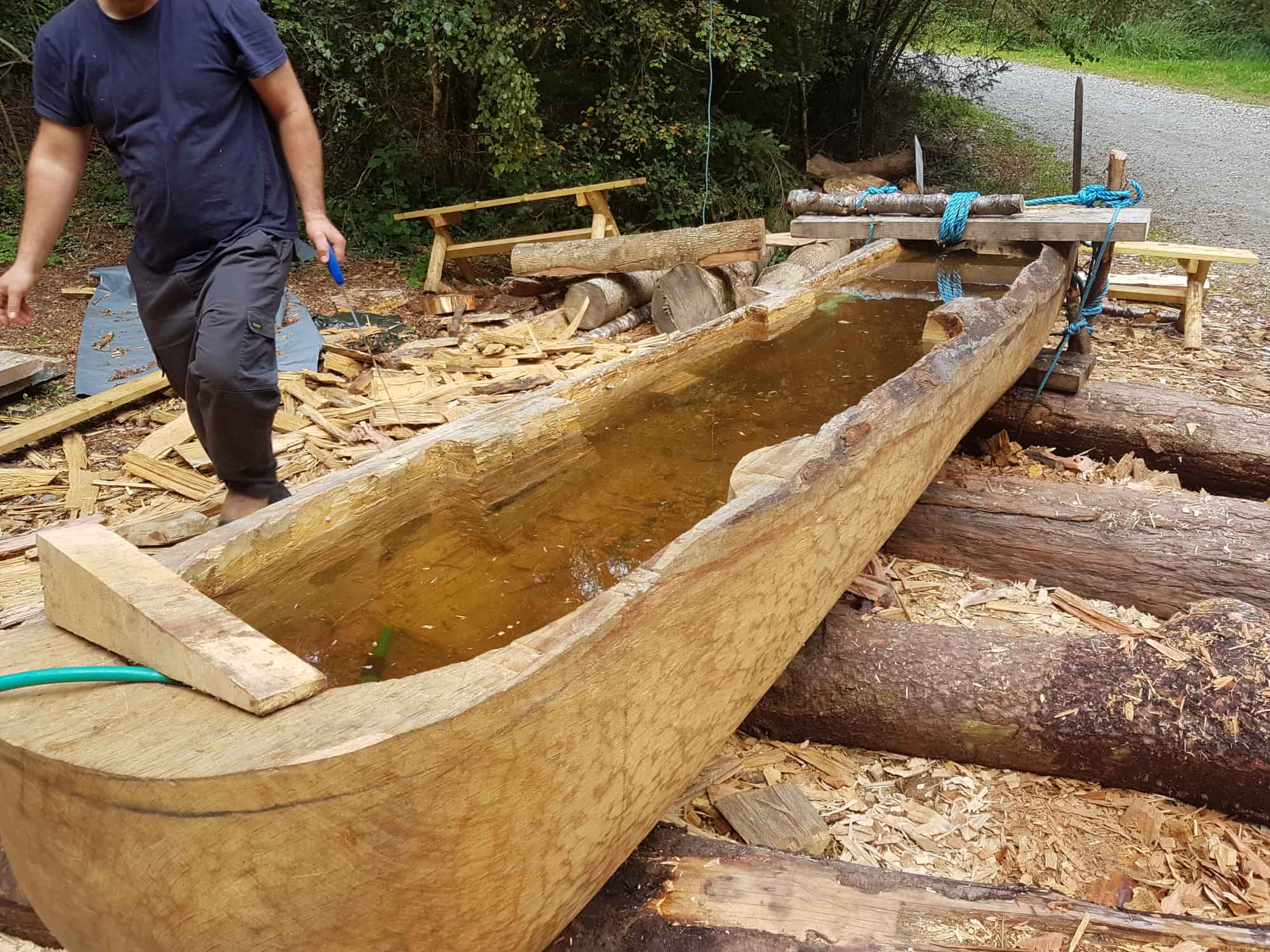 Once the hollowing process reached the floor of the boat, axes and hand adzes were then used to shave the sides of the boat to the desired final thickness. The archaeological record shows that the floor of Irish dugout boats were two to three times thicker than the boat’s sides, which were usually between 2 and 3cm thick. This made the boats very stable to use and would not capsize. 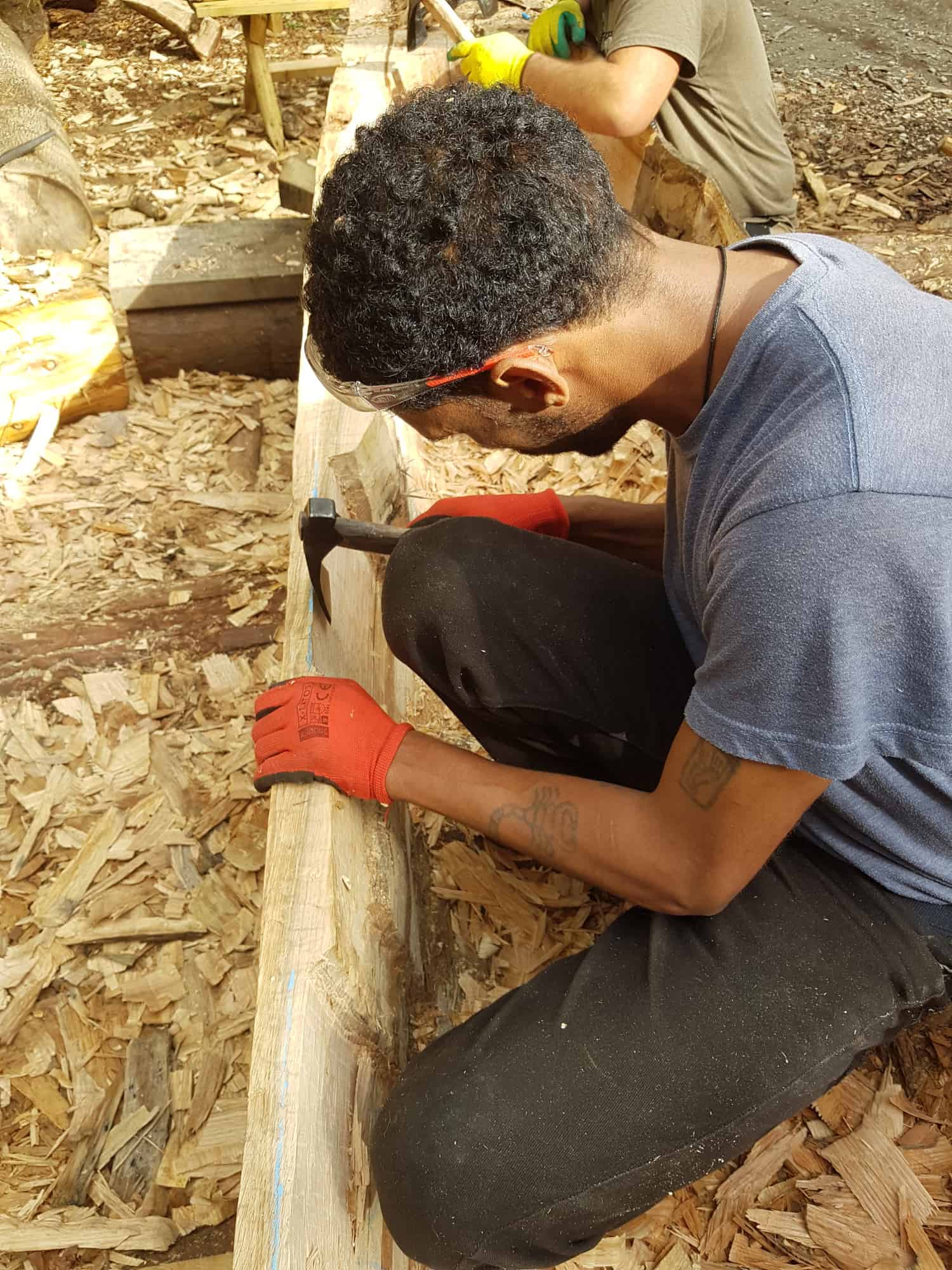 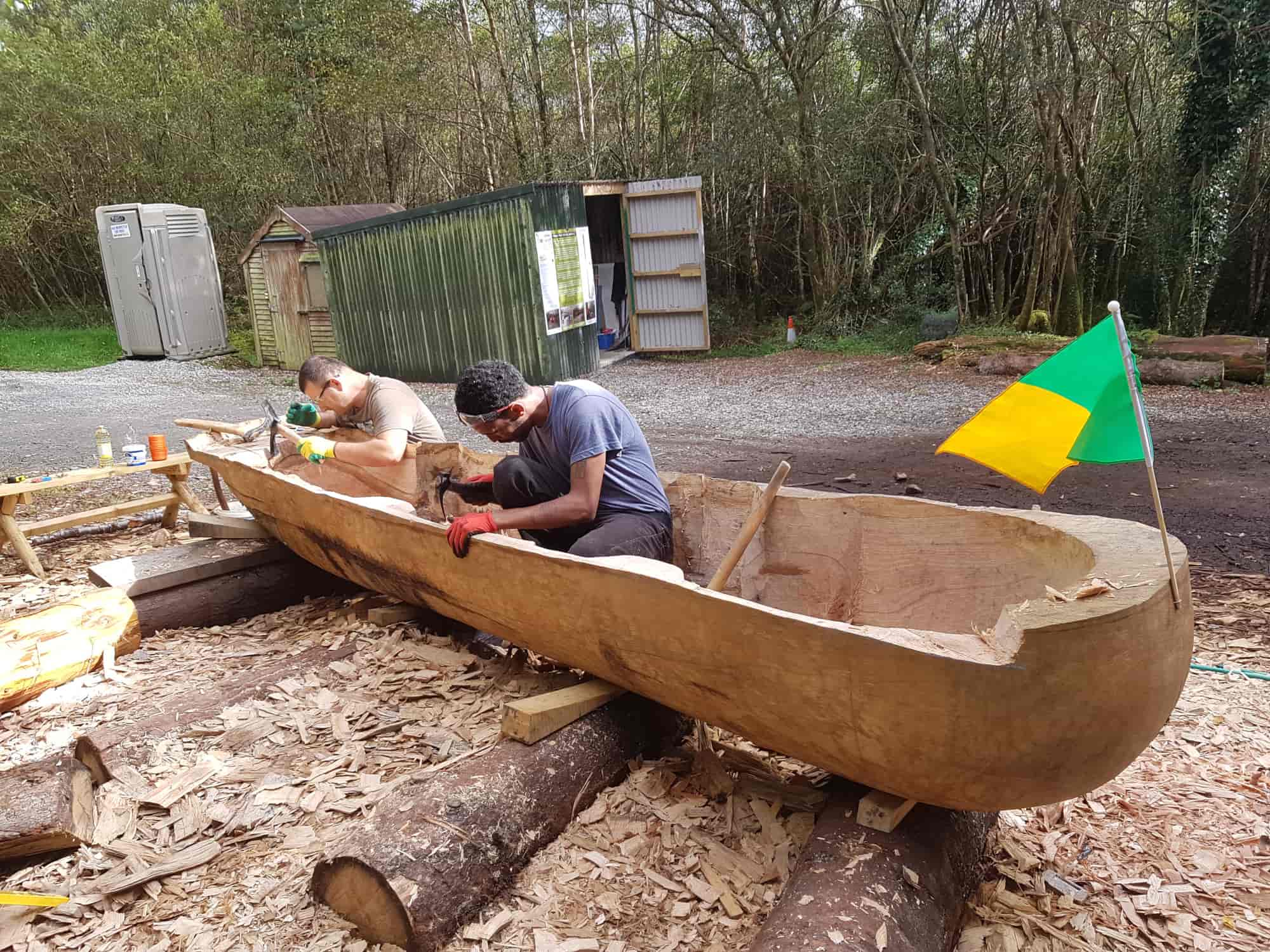